Memories of Home in the Midst of Foreclosure 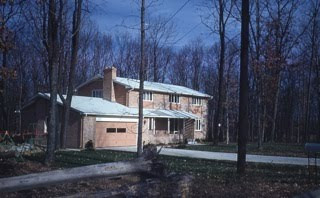 The newly built home on Rolling Green Drive in 1962.


Expatriate Graydon Forrer of Washington D.C. chronicles the fate of the house he grew up in, reminding us that suburbia has been hit by the foreclosure crisis as hard as urban areas:

Like so many Flint-area expatriates, I recently had the disconcerting experience of seeing the house I grew up in listed at a bank auction site.

The house is located on Rolling Green Drive in the Warwick Hills subdivision of Grand Blanc Township. My father, a physician, had the house build in 1962 when we moved to Grand Blanc from Davison. My father and mother selected what was then a respectable mid-century modern design, brick with clean lines.

When it was being built, it was only the third, possibly fourth house on a block that had only recently been carved out of the woods adjacent to the Warwick Hills golf course. Our few neighbors included Vern Parsell who owned Parsell’s Buick dealership and the owner of Spring’s Drugs located at the corner of Saginaw St. and Burton Road.

I think that my parents paid around $40,000 for the house which was built by local Flint builder Dick Page. The lot, I think, cost about $3,000 and came with a membership to Warwick Hills Country Club. Over the years, they added a screened in back porch, finished the basement and re-modeled the kitchen at least twice.

Eventually, all the lots on the nearly empty street were sold and developed into comfortable upper-middle class homes. But before the transformation was complete, my brothers, our neighbors, and I spent a lot of time playing in the swamp that was in the undeveloped property behind the house, carving bike trails through the woods and taking advantage of the construction of more than one of our neighbor’s houses to obtain building supplies for our various forts, tree houses, bicycle and skate-board ramps and Buick Open lemonade stands.

My parents stayed in the house until 1987 or 1988, when they sold in what was then a down market for a price that is only about $25,000 less than the list price at the bank auction site. They moved on first to Alaska and finally retired to Tucson, Arizona where they reside today. This was the only house they built, however, and for nearly 30 years, it reflected my parents taste and even today, in some small way, it remains home.

Over the years, I have watched Flint and the Flint area’s decline with great sorrow. Stores, restaurants even old familiar gas stations and businesses have all disappeared. Neighbors have retired and moved-on. Indeed, I haven’t been back to the area in more than 10 years. On my last trip, a trip to Ann Arbor to accompany my father to his 50th medical school reunion at the University of Michigan, I took an afternoon to drive with my wife — a California native — north to Flint to visit the old neighborhood and to see what had happened to a once thriving industrial community.

We drove to Warwick and onto Rolling Green Drive and our house (for that it will always be for me) looked pretty much the same even though it hadn’t been our house for more than 12 years. The yard was updated and the front door had been changed. The new owners had a hot-tub in the back yard off the basement door. In spite of all that had changed in Flint, the house was still there, taken care of and the rest of the neighborhood was equally well kempt.(Although all the houses in Warwick seemed smaller, especially in comparison to all the new McMansions that seemed to be sprouting-up in new subdivisions all over the South Saginaw St. end of Grand Blanc Township.)

Of course, I’ve no idea how it ended up as part of a bank sale, or why the auction price was so much lower than other sale properties on the block? That a house in Warwick Hills could be at sale as part of a bank auction just underscored how times had changed in Flint and Genesee County .

So there was our house on a bank auction site. In the accompanying picture, the lawn looks as if it hasn’t been mowed for a while. The roof has been redone and altered by removing a vent/skylight that let sunlight into the front family room. Otherwise, the house is a ghost image of what I knew as a child and seemingly as solid as when my father had it built and when we live there. On a Flint area realty site, I saw some interior pictures taken for the sale. Some of the rooms had been altered, hard wood floors had replaced the wall-to-wall carpeting that was a must have for all upwardly mobile homeowners in the 1960s and '70s. There were crown moldings where before the rooms were once decidedly mid-century modern. They were also empty and devoid of my mother’s taste and decorating influence.

The auction site’s encouraged potential bidders to bring some “sparkle” back to the property. All the sparkle, however, seems long gone. 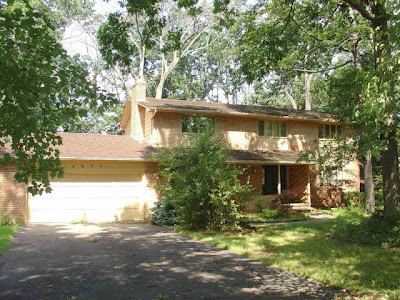