Flint Portraits: John P. Ribner and the Legacy of the Bear 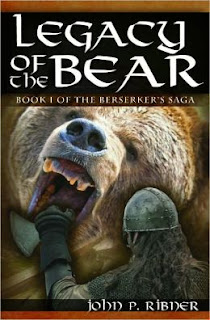 A reluctant hero with a tortured past, a willing mentor and a host of fearsome adversaries come together in the new novel, “Legacy of the Bear.” But what does this have to do with Flint, Michigan? Plenty!
“Legacy of the Bear” is the exciting and fast-paced novel written by Flint native John P. Ribner. Set during the Viking Age, the story chronicles Autar Magnusson’s quest to become a man and a warrior. Once labeled a coward by his father, Autar is nonetheless determined to risk his very life against a ferocious and legendary bear to prove himself worthy of becoming a renowned warrior. But will he inherit the legacy of the bear?
John’s lifelong love for all things Viking began in his hometown of Flint, when he was a student at Gillespie Elementary School. “I think I was in fourth or fifth grade when I found a book about Norse mythology in the school’s library, and I checked it out on a whim because I liked the artwork on the cover,” said John. “When I read it, I was immediately intrigued by the power, beauty and ultimate tragedy that is the legacy of the Norse gods. It changed my life.”
From there, John continued his interest in all things Viking while also being introduced to the world of fantasy fiction in his early teens. He got serious about writing in 2012, when he finished and published his novel. “At the heart of it, ‘Legacy of the Bear’ is a very human story that almost anyone can relate to,” he said. “It’s a coming-of-age tale in which a sensitive person searches for maturity and he finds it, but only after much emotional loss and difficulty. His father was a great warrior who died a hero’s death; but, Autar chooses not to follow in his footsteps. Life has a way of pushing him onto the path that will lead him to his destiny, though, and it’s not long before Autar is forced to confront his troubled relationship with his father – as well as his fears – by accepting the challenge to fight a bear with just a spear and an axe.”
John says that Autar’s journey parallels his own experiences growing up in Flint. “The process of creating this book has been a journey for me, as much as it was for Autar,” he said. “Writing it has definitely brought back some memories; but it’s also helped me place those memories in the greater context of my life. It’s been an experience, that’s for sure!”
“Legacy of the Bear” is available in e-book format for the Kindle and Nook Tablet, and a printed version is also available on Amazon.com. John P. Ribner is easily accessible on Facebook and Twitter. John currently lives in Novi, MI with his wife and three children, where he is busy writing “Prophecy of the Bear”, the sequel to “Legacy of the Bear,” and “World So Dark”, a neo-noir crime thriller.