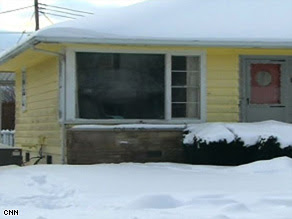 Two michigan stories that make you wonder what the future holds for the United States...

Marvin Schur's neighbors found the World War II veteran's frozen body in his Bay City bedroom on January 17, four days after a device that regulates how much power he uses -- installed because of failure to pay -- shut off his power. A medical examiner said the temperature was 32 degrees in his house when Schur's body was found.

Utility officials said Schur owed at least $700, but Schur's nephew, William Wallworth, said his uncle told him he was worth at least a half-million dollars, and authorities say Schur had cash clipped to his utility bills on his kitchen table.

Wallworth said someone should have looked at Schur's payment history and made direct contact to see whether something was wrong.

"This wasn't about someone who didn't have the money to pay his bills," Wallworth said of his uncle, a widower known to his nieces and nephews as "Uncle Mutts."

And Charlie LeDuff of The Detroit News writes:

This city has not always been a gentle place, but a series of events over the past few, frigid days causes one to wonder how cold the collective heart has grown.

It starts with a phone call made by a man who said his friend found a dead body in the elevator shaft of an abandoned building on the city's west side.

"He's encased in ice, except his legs, which are sticking out like Popsicle sticks," the caller phoned to tell this reporter.

"Why didn't your friend call the police?"

"He was trespassing and didn't want to get in trouble," the caller replied. As it happens, the caller's friend is an urban explorer who gets thrills rummaging through and photographing the ruins of Detroit. It turns out that this explorer last week was playing hockey with a group of other explorers on the frozen waters that had collected in the basement of the building. None of the men called the police, the explorer said. They, in fact, continued their hockey game.

Before calling the police, this reporter went to check on the tip, skeptical of a hoax. Sure enough, in the well of the cargo elevator, two feet jutted out above the ice. Closer inspection revealed that the rest of the body was encased in 2-3 feet of ice, the body prostrate, suspended into the ice like a porpoising walrus.