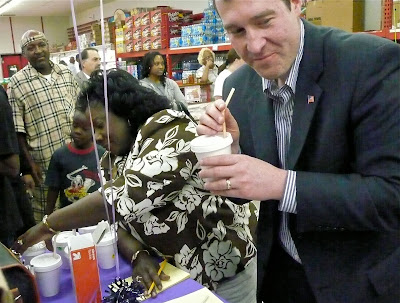 When I was writing about the Flint mayor's race last summer for Slate, I was impressed that two rational, well-adjusted candidates — Dayne Walling and Brenda Clack — were fighting so hard for a job that seemed so thankless.

“The winner of this city's Aug. 4 special mayoral election will be expected to solve problems caused by complex global economic forces that he or she is powerless to control, while also mastering the mundane yet vexing task of running a weary city in need of jobs and revenue,” I wrote. “Hey, I got a pothole on my block, and the garbage truck missed my house yesterday. And while you're at it, could you please do something about deindustrialization?”

Less than a year into office, Dayne Walling is discovering that the honeymoon is very short for Flint mayors. He was immediately criticized for two high-profile appointments to his administration. A Flint school board member launched a quixotic recall effort against him. Then he was forced to lay off police and firefighters to help erase a massive budget deficit he inherited after efforts to renegotiate union contracts stalled. The layoffs happened to coincide with a series of fires in abandoned houses and buildings. Arson is suspected, and Walling said the fires had a “perverted political purpose.” Awkwardly, Walling has had to request special police protection at his home after he received anonymous threats. Oh, he also had to reduce garbage pickup, causing residents to fret about rats.

Of course, let’s not forget about Flint’s seemingly never ending unemployment problems and shrinking tax base.

Just to make life interesting, Walling plans to run for re-election in 2011, and he may face a familiar opponent. Former Mayor Don Williamson, who resigned in the face of a recall election, is hinting at a possible return to politics.

But Williamson said he’s recently received “a couple thousand phone calls — or more” from supporters who say they’d like to see him go for it.

He said he’s recovered from the health issues that prompted his resignation from the mayor’s office, and he feels “in perfect shape.”

“Somebody has to save the city of Flint,” Williamson said. “The people are calling me.”

More than 2,000 calls? Really? That’s about 10 percent of the people who voted in the last mayor's race. Let’s see, Walling was elected in early August, so if the calls of support for Williamson started immediately, that means about 9 calls a day, every day, until now. No wonder the former mayor is in such good shape; he’s spending a lot of time running to the phone.

And Walling is spending all his time trying to run the city. No one said it would be easy.