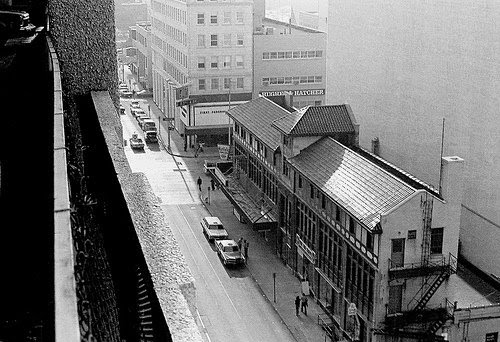 Thomas Wirt (a.k.a. Jar With Most) is a photographer who captured the essence of Flint starting way back in the seventies. Here's a 1977 view of the corner of South Saginaw and First Street from the parking structure of Genesee Towers. Smith-Bridgman's looms in the background to the right, behind a wall of bricks. The Book Stall is visible in the lower right corner. For more of Wirt's photos, go here. 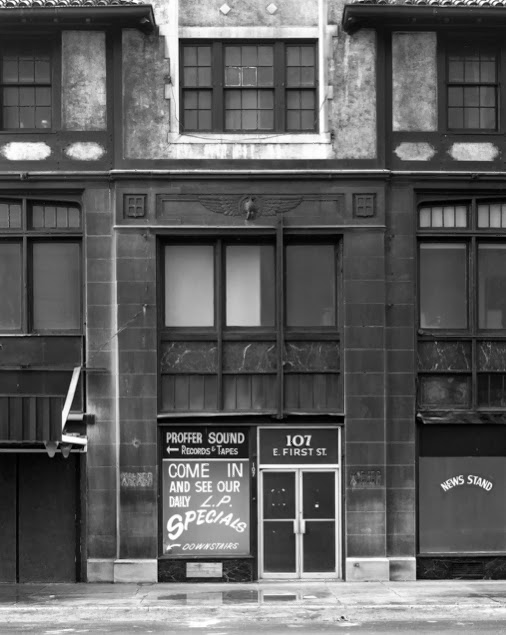 A close-up of Milner Arcade by photographer Gordon LaVere shortly before demolition. 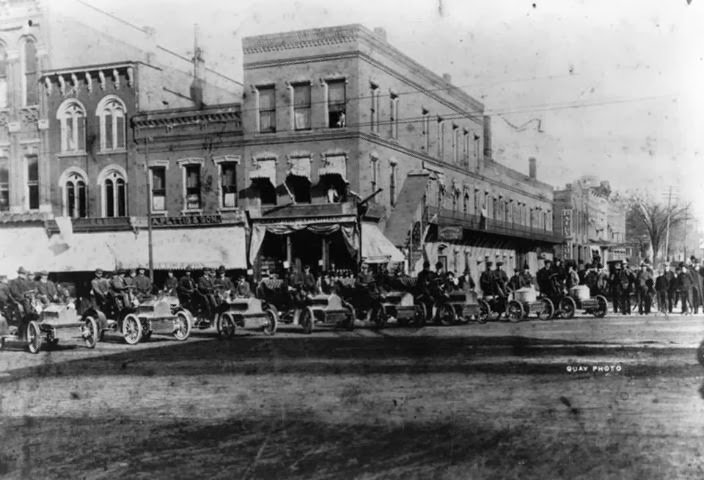 A collection of Model B Buicks when in front of Milner Arcade in 1904, before it got a faux Tudor facelift, when Billy Durant took over the company. (Photo via Kevin Kirbitz) 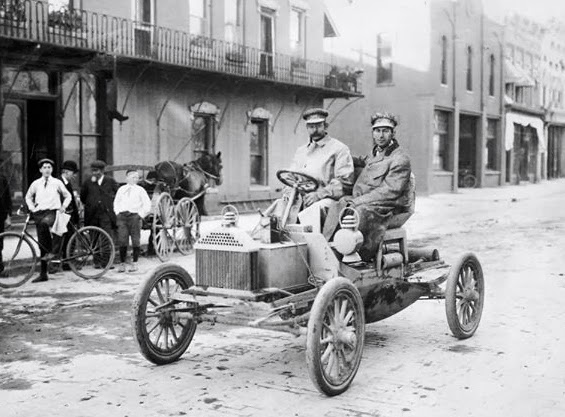 The first Flint Buick returns to Vehicle City on July 12, 1904, after a test drive to Detroit with engineer Walter Marr (left) and Tom Buick, son of founder David Buick, behind the wheel. Milner Arcade, a few schoolboys, and the horse and buggy the Buick would replace are in the background. (Photo via Kevin Kirbitz) 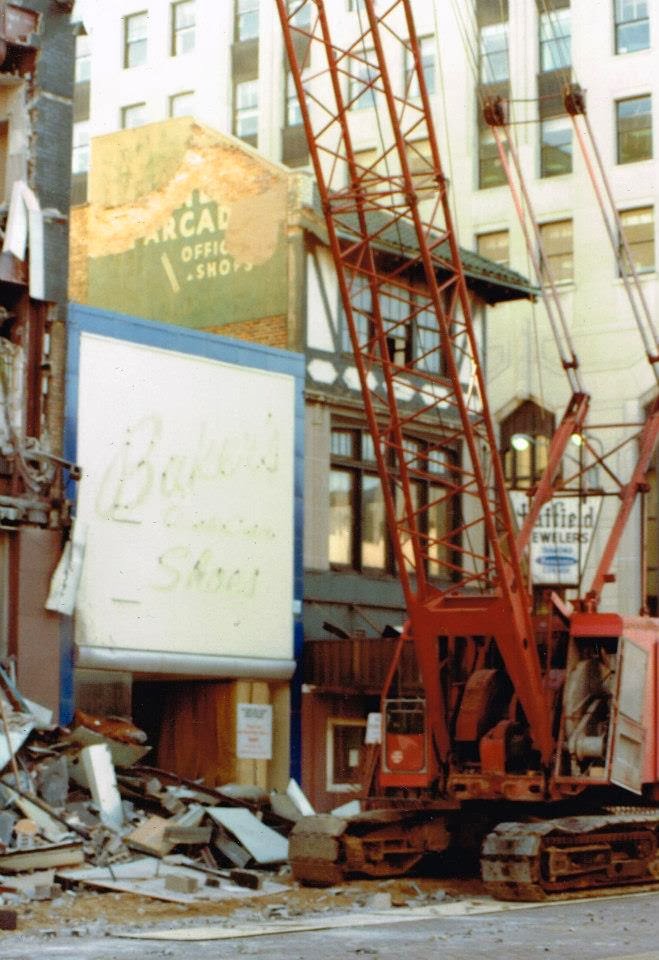 Before you enjoy the warm, nostalgic glow too much, remember that this is Flint, and parking lots must be created. (Photo by Kevin Kirbitz) 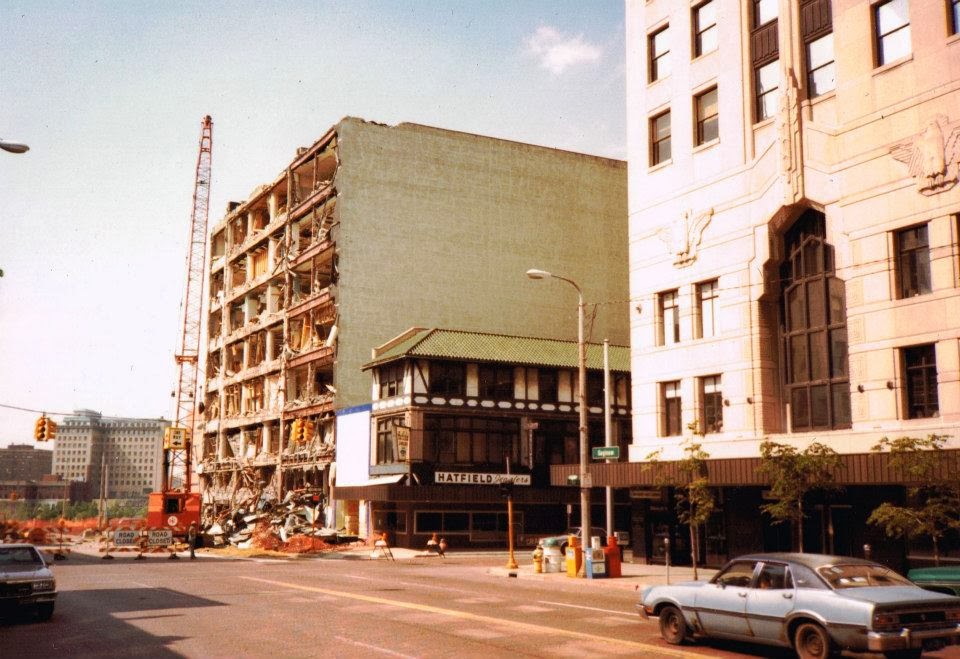 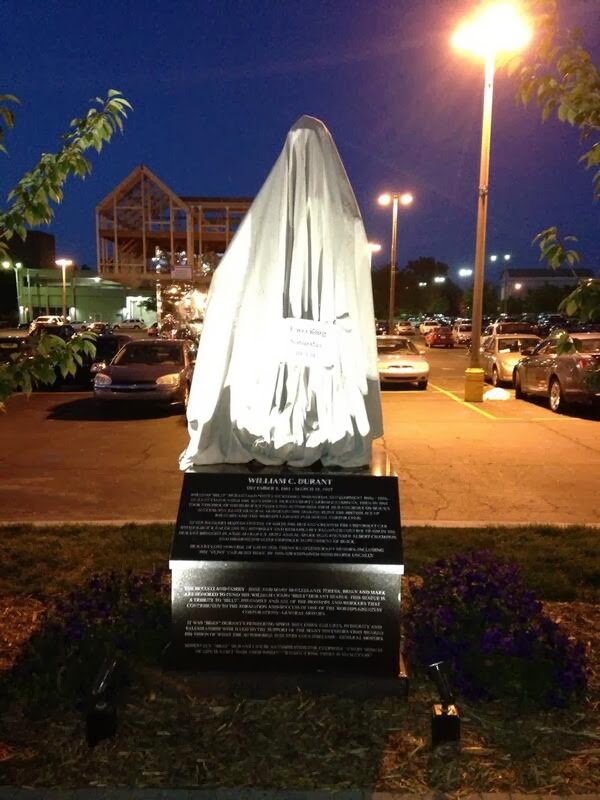 A more recent photo of South Saginaw near First Street, with the ghostly, enshrouded statue of G.M. founder Billy Durant awaiting its unveiling. And, of course, a parking lot in the background. (Photo via @RebeccaFedewa) 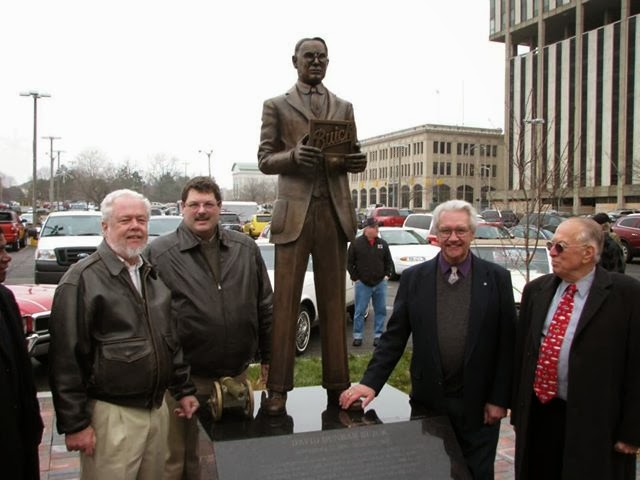 The statue of David Buick at its unveiling in front of the parking lot once home to Smith-Bridgman's and Milner Arcade. The recently demolished Genesee Towers is visible in the top right corner.

A comment from GaryG offers some perspective on the fate of the buildings that once defined South Saginaw Street near First Street in Flint:

I’ll not forget the day these demolition photographs were taken. I was driving down Court street early that Sunday morning, glanced north, and noticed the crane in the middle of Saginaw street. It could mean only one thing; after starting from the river and tearing down everything in sight between Saginaw and Harrison streets for the proposed Water Street Pavilion and its giant surface parking lot, the demolition crew had finally gotten to the Smith-Bridgman building.

There was a group of preservationists, of which I was one, that had been trying hard to save the historic facades on this block. I had advocated for a modified version of a scheme used in other cities, where the building faces were kept, while new structures were constructed behind them. In this case, the plan would be to salvage the front thirty or so feet of all of the buildings on this block, essentially converting them into shallow lease spaces, similar in depth to the Milner Arcade building, which would also be saved. But it was just one of many creative ideas rejected by the powers that were, even though they would have still gotten their parking lot.

Few people seemed to know how magnificent the original front elevation of the Smith-Bridgeman building, in particular, had been, since acres of teal colored sheet metal had been placed over it decades before. It made sense that the contractors were demolishing the façade first, early on a Sunday morning, so as to reduce the chance that too many people might discover what they were losing. I turned and drove up to the site in time to find that the metal had been stripped away to indeed reveal what I had longed to save: the original, finely proportioned, cut stone and brick façade, none the worse for wear, with every wood framed plate glass window intact, each still complete with their wooden venetian blinds. I was struck by how pleasingly gracious and beautiful it was, a symbol of a more discerning time.

The shadows are a testament that it was late in the day when these pictures were taken; only hours after Flint’s finest architectural facade poignantly succumbed to yet another case of unmitigated short-sightedness.