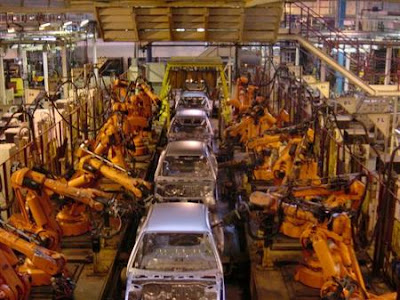 Some readers who are in the thick of it may find this too simplistic, but Edward Silverstein offers a fairly succinct overview of the current U.S. auto industry and the role of organized labor:

"To understand the labor issues facing the U.S. auto industry is to understand the U.S. auto industry itself. Between 2006 and early 2008, the Big Three automakers (GM, Ford and Chrysler) cut about 80,000 jobs through buyouts and early retirements, and more are on the way. The goal is to have a smaller, lower-paid workforce. The former workers will head into new careers in different industries. Layoffs could be down the road, too.

"A major problem facing the Detroit-based auto industry is that contracts negotiated by the auto unions were so generous, compared at least to the salary and benefits offered by non-unionized auto manufacturers elsewhere in the world, that the Big Three can’t remain competitive with companies from overseas.

"They are not selling enough vehicles – due in part to wages and benefits spelled out in contracts. Some workers blame management for not offering and concentrating on the right product line. Others say that a government-sponsored national health plan would alleviate much of the pressure that the auto companies find themselves facing. Americans spend more on health-care per capita than other nations that are known for manufacturing cars – Japan, Germany, China, South Korea and France. Some workers would like tariffs imposed on imported cars. Then there’s the issue of the U.S. economy, which may keep some consumers from being able to afford a new car.

"The union has been generally supportive of the buyouts. In fact, the employee buyout plans were developed with the United Automobile Workers (UAW) union ."

"The UAW has also been working with the auto industry to find a way to keep up with retiree health care costs, which are estimated to total between $100 and $116 billion as of early 2008. GM may be responsible for about half of that amount, and has four retirees for every current employee, according to industry estimates. The plan being developed as of 2008 calls for setting up a health care trust administered by the UAW, called a Voluntary Employees Beneficiary Association (VEBA).

"Critics argue that VEBAs in other industries tend to be under-funded by the companies, so that shortfalls need to be made up by the individual retirees themselves paying higher deductibles and co pays. GM expects to save billions once the trust is created."

"The auto industry is continuing to look for ways to pay workers less. One option gaining in popularity is the two-tier salary system where non-core workers in manufacturing plants earn much lower wages than those with core responsibilities. Many workers resist such a system.

"The automakers say these are the kind of steps needed to make the U.S. auto industry competitive with companies such as Toyota. The hope from unions and management is that as American-made cars continue to improve, consumers over time will opt to buy a Ford, GM or Chrysler rather than an import.

"Whatever the outcome, it’s clear that the Rust Belt – in states like in Illinois, Indiana, Michigan, and Ohio, as well as Pennsylvania – has suffered from the slump in the auto industry. From 2000 to 2006, Michigan lost more than 330,000 jobs, most of them in manufacturing. The UAW has seen a decline in membership since the 1970s, when membership was over 1.5 million. Membership was less than 540,000 at of the end of 2006.

"The UAW has held strikes in recent years but for the most part the union appears to be cooperating with management to bring improved health to the nation’s struggling auto industry. The question is whether the workers will back concessions and make the industry more economical and more competitive."